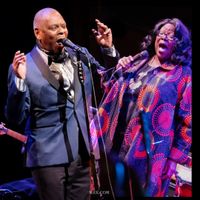 MN music stalwarts Ginger Commodore and Dennis Spears are back together again for a night of favorites! Backe by the maestro Sanford Moore on piano and the soulful colorings of Daryl Boudreaux on percussion.

Ginger Commodore has been a member of the Midwest music scene for many years. Classically trained, Gospel influenced, Jazz inspired. Ginger’s musical foundation is a true amalgam of musical styles presented with her own unique delivery, from touching whisper to full throated (yet controlled) power.

Her career has taken her down many musical roads. She began her performing as a long time member of the Grammy Award winning Sounds of Blackness, touring across the United States.

Dennis Spears has performed roles at Penumbra, The Guthrie Theater, Illusion Theater, Syracuse Stage, Indiana Repertory Theater, Hartford Stage, Ten Thousand Things, Minneapolis Children’s Theatre, Actor’s Theater of Louisville, Chanhassen Dinner Theater and The Kennedy Center. For his portrayal of Nat Cole in I Wish You Love, he received the Ivey Award for Excellence in Acting. Mr. Spears has performed nationally and internationally as a featured vocalist with the vocal jazz ensemble Moore By Four, and serves as Artistic Director for Legends Music Series at the Capri Theater, where he has contributed greatly to the Capri being named Best Venue for Live Jazz in the Twin Cities. Dennis is a 2013 inductee into the Minnesota Music Hall of Fame!