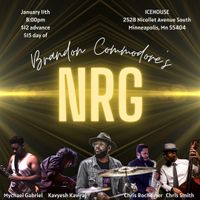 Taking a moment away from his duties as Musical Director for Stokley and the VU and as co-founder of #MPLS the band, drummer Brandon Commodore is finally ready to present Brandon the artist and songwriter. This show will feature the debut of original music that has been in the works and is now ready to be shared with you. The music itself will be a mixture of jazz, hip hop and soul built on a foundation of influences from his time spent as drummer for the Grammy Award winning, The Sounds of Blackness, to his 10 year tenure as drummer for the legendary Mint Condition followed by the co-creation of IceHouse favorite #MPLS and now drummer and MD for Stokley & the VU.

And he has assembled a band up to the challenge of debuting this new music with Chris Smith on bass, Mychael Gabriel on guitar, Kavyesh Kaviraj on keys and Chris Rochester on sax. They along with a few special guests are ready to do their thing for you.

Sound Energy (NRG) comes from vibrations moving through something. Sound energy is the result when a force, either sound or pressure, makes an object or substance vibrate.

Come on out to ICEHOUSE, January 11th and enjoy some good vibes and musical NRG!